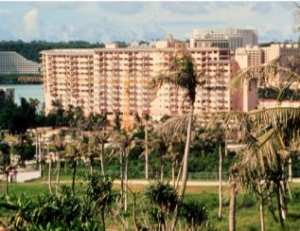 The Royal Palm Hotel consisted of twin 12-story reinforced concrete special moment resisting frames. The building was designed in 1990 in accordance with the requirements of the 1988 Uniform Building Code. Guam is subjected both to strong earthquakes and typhoons. The island was designated as Uniform Building Code Zone 3, and also had design wind speeds of 140 miles per hour.

Structural design was performed by a Civil Engineer, licensed in both Guam and California. The Civil Engineer of record for the project also served as the Special Inspector of record. Guam is a U.S. territory. Licensing laws on Guam are similar to those in California, with both a civil license and structural title. At the time of the collapse, the structural engineer did not possess structural title authority.

Construction of the building was completed in July, 1993. On August 8, 1993 a powerful earthquake shook the island, causing partial collapse of the structure, which was determined to be a total loss. No fatalities occurred but there were some injuries.

A lengthy litigation ensued following the collapse and extensive structural investigations were performed by a number of U.S. experts. Extensive design and construction flaws were found in the structure. These included:

It was also determined that the contractor did not follow the structural details on the drawings. In particular, two critical flaws were found:

Special inspection reports, signed by the engineer of record, indicated that the improperly constructed joints had been inspected by the engineer, and that he approved of the placement of reinforcing steel. Further, correspondence and notes on drawings indicate that because the seismic design forces for the structure were less than the wind forces, compliance with the detailing requirements for special moment frames, though desirable, was not essential.

Two primary types of failure – shear failure of joints in the special concrete frame and shear failure and compressive crushing of gravity columns occurred at one of the two structure’s second story. This resulted in partial collapse of the structure, and eventual demolition of both structures.

In trial, the jury ultimately found the contractor responsible for the collapse, but not before the engineer of record omitted culpability and settled out of the litigation, giving up his insurance cover in the process.

Although the contractor was ultimately found to be financially responsible for the collapse, for failure to construct the building as shown on the drawings, there is no question that the design had many errors and that extensive damage, possibly including collapse, may have occurred even if the structure was constructed as designed. Further, the structural engineer’s complicity in the incorrect construction, given that he acted as special inspector for the project is without question.

The structural engineer did not have proper understanding of the basis for earthquake-resistant requirements in the building code and did not act prudently either in designing the building or acting as its special inspector. Ultimately this resulted in the total loss of a $70 million hotel, just weeks after its completion and total financial losses that more than doubled the building’s construction cost.

There are no SELC events planned at this time.
END_OF_DOCUMENT_TOKEN_TO_BE_REPLACED
Questions or comments?
[email protected]
Organizations that make up SELC
SEI | NCSEA | CASE